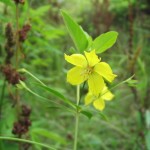 The rotate corolla of Lysimachia ciliata.

YOUR DAILY DOSE OF BOTANY – NOVEMBER/DECEMBER 2014

Don’t you just hate it when botanists start tossing around specialized terminology to describe every part of every plant they see? Although this terminology can make things seem more confusing at first, it’s easy to understand the importance of a good botanical vocabulary when you look at the variability and diversity of different parts of plants. For the next few months in this column, we’ll look at some of the different terminology used for corolla types you may see on plants in our region. The corolla, for starters, is the inner series of the perianth, or the petals, collectively.
Let’s start with some of the corolla types that you could see in an actinomorphic (remember that term from the October 2012 issue of The Plant Press?) flower. One of the most simple corolla types is a rotate corolla, or a corolla that is flat and generally circular in outline, with corolla lobes radiating at a right angle from a short corolla tube. Rotate can also mean “wheel-like,” which helps to explain this morphology. The flowers of Lysimachia ciliata (fringed loosestrife) have five-parted, rotate corollas.
A cruciform corolla is similar to a rotate corolla, but it is cross-shaped, meaning that it is four-parted. Plants in the family Brassicaceae (the mustards), including Cardamine douglassii (purple spring cress), 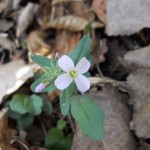 Cardamine douglassii, like all mustards, has a cruciform corolla.

characteristically have cruciform corollas.
When a corolla has a short-cylindric or crown-like appendage, such as a petal-like structure between the stamens and the true petals, it is said to be coronate. The unique flowers of Hymenocallis occidentalis var. occidentalis (northern spiderlily, a native plant in southwestern Indiana), have coronate corollas. The corolla of the ornamental Narcissus pseudonarcissus (daffodil) is also coronate.
Next month, we’ll take a look at actinomorphic flowers that generally have a more tubular shape.
If you have a question about plant terminology or morphology that you would like answered in a future edition of this column, send me an email at snamestnik@orbisec.com. I may not be able to address all requests given the space allotted for this column, but I will answer those that I can. 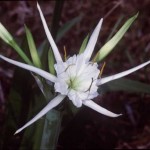