In this column of the last couple of issues of The Plant Press, we looked at various corolla types that are actinomorphic in nature. Now we’ll begin looking at zygomorphic corolla types. Remember that term from the October 2012 issue of The Plant Press? We’ll start with those that have a fairly distinct tube. 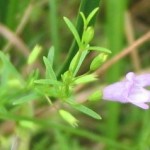 In a bilabiate corolla, the tube gives way to a limb (the expanded part of the corolla) that has two lips (bi- = two, labium = lip). The lobes of each lip of the corolla are often fused, at least at their bases. The mint family (the Lamiaceae, formerly known as the Labiatae, and that’s no coincidence!) is well known for having bilabiate corollas. One such example of a mint with bilabiate corollas is limestone calamint (Clinopodium arkansanum), an inconspicuous state endangered species that grows in calcareous habitats such as fens and pannes. 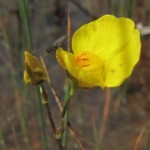 Some bilabiate corollas have a structure on the lower lip that blocks the opening in the corolla unless the limb is forced open. This structure is known as a palate. A corolla with a palate that causes the lips to remain closed is called personate. The bilabiate corolla of flat-leaved bladderwort (Utricularia intermedia), a carnivorous species of fens and bogs, is personate and has a palate (in the photograph, the palate is the “bump” with the red stripes). Personate corollas are often said to look like a face (you may need to use your imagination a bit to see this).

At the other end, some corollas possess a pointed, extended sac known as a spur; as a result, these corollas are known as spurred corollas. An example of a plant with a spurred corolla is spotted jewelweed (Impatiens capensis), a common species with explosive fruit that grows in mesic upland forests, floodplains, marshes, and on lake shores. 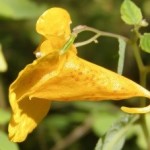 Note the spur on the spurred corolla of Impatiens capensis

A corolla in which the tube opens into a limb with two lips, one of which is hood-like or helmet-shaped, is known as a galeate corolla. This makes plenty of sense, since “galea” means “helmet.” This stuff is easy! An example of a plant that has galeate corollas is wood betony (Pedicularis canadensis), a hemiparasitic species with fern-like leaves that grows in prairies, savannas, and mesic upland forests. 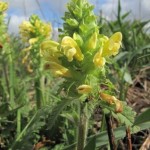 The corollas of Pedicularis canadensis are galeate

A gibbous corolla is one that has a protuberance or swelling on one side. Some otherwise actinomorphic corollas are made zygomorphic because of this swelling. Red honeysuckle (Lonicera dioica), a native honeysuckle vine that grows in savannas and forests, has gibbous corollas.

Next month, we’ll finish our look at corolla diversity by looking at zygomorphic corollas that are more irregular and that lack a distinct tube. 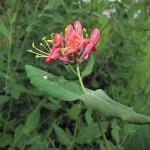