YOUR DAILY DOSE OF BOTANY – DECEMBER 2015

We investigated the great diversity in corolla types in this column of The Plant Press in fall 2014 through spring 2015.  Now it’s time to see how the individual flowers on a plant are arranged into the structure known as the inflorescence. As you would expect, there are numerous types of inflorescences, and each of those has a unique name to better help botanists describe the characteristics of plants.  To begin our discussion of inflorescences, we’ll start with the three most simple inflorescence types. 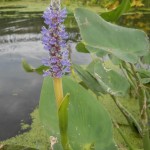 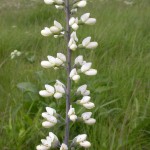 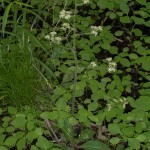 In a panicle, not only are the individual flowers stalked, but the stalks are on a stalk as well.  A panicle can be thought of as a compound raceme.  Another way to think about it is that a panicle consists of several racemes that have a shared axis; or, the stalks of the flowers in a panicle do not connect directly to the

rachis of the inflorescence.  An example of a plant that has an inflorescence that is a panicle is swamp saxifrage (Micranthes pensylvanica), an uncommon plant that often grows in wetlands with groundwater influence.