I was recently approached with a question about trillium (Trillium spp.) morphology and I thought that my answer would be of interest to our readership.  The question had to do with the “leaves” on trilliums.  Did you know that trilliums don’t have true leaves?  What?  How can that be? 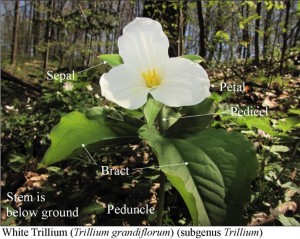 Unlike a typical plant, which would have distinct roots underground leading to an above ground, usually upright main stem, trilliums have a main stem that is totally below ground.  An underground, horizontal stem is known as a rhizome.  In some species, this rhizome can be elongated, but in others it is very short.  Instead of having true leaves along this underground stem, trilliums have cataphylls, which are modified leaves that have a function other than photosynthesis.  The cataphylls sheathe the rhizome and are papery and scale-like.  Flowering branches may arise from the axils of these cataphylls.  The flowering branch is the part that we see above the ground surface.  As in other plants, the stem structure beneath the inflorescence is known as a peduncle, so the above ground “stem” is actually the peduncle in the trilliums.  Note that some trillium species have an extension of the peduncle, often considered the pedicel, which makes the flower appear stalked (this feature is used to separate subgenus Trillium, those with pedicels, from subgenus Phyllantherum, those without pedicels).  Because the above ground “stem” is actually a peduncle, the three above ground “leaves” are considered bracts, modified leaves that are usually found immediately below the flowering structure on the peduncle.  Because of general familiarity with botanical terms, many botanists still consider the peduncle a stem and the bracts the leaves, but some plant keys will use the terms presented here, so it is important to understand the parts of the plant if you are trying to identify a trillium to species.  And with any luck, we should start seeing the trillies in flower in less than a month!

If you have a qu 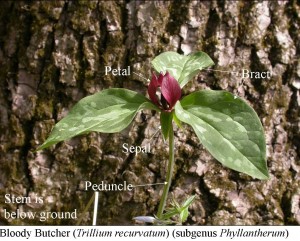 estion about plant terminology or morphology that you would like answered in a future edition of this column, send me an email at snamestnik@orbisec.com.  I may not be able to address all requests given the space allotted for this , but I will answer those that I can.