Last month, we looked at the differences between rotate, cruciform, and coronate corollas.  All of these corolla types can be considered actinomorphic in nature.  As promised, this month we’ll look at actinomorphic corollas that are generally more tubular in shape.

The corolla of Campanula rotundifolia is campanulate.

If you’re familiar with the plants known as the bellflowers, then you already know what the first corolla we’ll discuss looks like.  The bellflower family is the Campanulaceae, and by no coincidence a bell-shaped or cup-shaped flower is said to be campanulate.  Campanula rotundifolia (harebell), a plant of savannas, hill prairies, and rocky cliffs, has campanulate corollas. 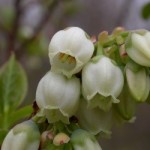 The urceolate corollas of Vaccinium corymbosum.

An urceolate corolla has a similar general shape to that of a campanulate corolla, but instead of being bell-shaped it is shaped like an urn and is expanded in the middle, narrowing towards its opening.  Many plants in the heath family (Ericaceae) have urceolate corollas.  One example is Vaccinium corymbosum (highbush blueberry), which grows naturally most frequently in bogs and swampy woods, and which is the most frequently cultivated blueberry for commercial purposes. 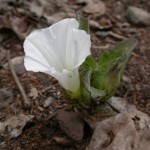 A salverform corolla is somewhat similar in shape to a funnelform corolla, but instead of tapering gradually, it has a narrow tube that abruptly expands into the flattened corolla lobes. Many plants in the phlox family (Polemoniaceae), including Phlox glaberrima var. interior (marsh phlox), which grows most frequently in moist to wet prairies, have showy salverform corollas.  Another term for this type of corolla is hypocrateriform. 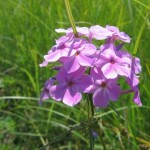 If a corolla is tube-shaped but lacks the expanded limb, or spreading corolla lobes, it is said to be tubular in shape.  The disc corollas in flower heads of plants in the sunflower family (Asteraceae) are tubular (remember from this column in the September 2012 issue of The Plant Press that flower heads in plants of the family Asteraceae can have disc flowers, ray flowers, or both).  One such plant is Symphyotrichum praealtum (willow-leaved aster), which is a conservative plant of wet prairies. 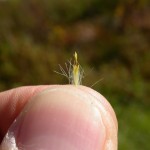 Next month we’ll take a look at some of the corolla types found on zygomorphic flowers.