YOUR DAILY DOSE OF BOTANY – OCTOBER 2012

Last month in Your Daily Dose of Botany, I mentioned that the disc florets of composites are radially symmetrical.  Another name for this floral morphology structure is “actinomorphic.”  Many plant species have flowers that can be described as actinomorphic.  If you could cut the flower in half in two or more planes and have identical-looking halves, you have an actinomorphic flower. As an example, think of a rose as a plant with actinomorphic flowers. 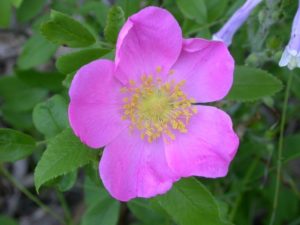 An actinomorphic flower of pasture rose (Rosa carolina); cutting the flower in half in any of the directions results in identical halves.

So, if many plant species have actinomorphic flowers, what do the rest have?  If a flower can only result in identical halves if it is cut in one specific plane, and cutting the flower in half in other planes does not result in identical halves, the flower is said to be zygomorphic, or bilaterally symmetric.  Orchids, for example, have zygomorphic flowers.

Although there is unimaginable diversity in the shape, color, and structure of flowers, all flowers can be described as either actinomorphic or zygomorphic.  Watch for the different symmetries in flowers the next time you’re out on a hike. 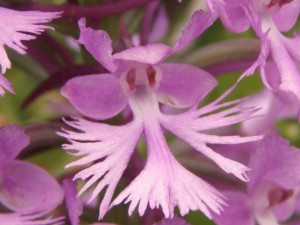 A zygomorphic flower of small purple fringed orchid (Platanthera psycodes); identical halves only result when this flower is cut in a single direction.

If you have a question about plant terminology or morphology that you would like answered in a future edition of this column, send me an email at snamestnik@orbisec.com. I may not be able to address all requests given the space allotted for this column, but I will answer those that I can.