Last month we began our study of inflorescence types and looked at three of those with the most basic morphologies: spikes, racemes, and panicles.  Now let’s look at three more types of inflorescences that can bear superficial resemblance to one another. 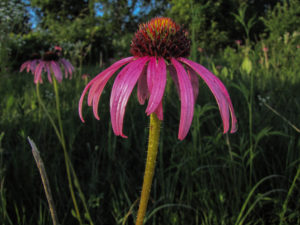 Plants in the family Asteraceae (the sunflower family, also called “composites”) have specialized inflorescences called capitula (singular capitulum).  In a capitulum, the individual flowers are packed so tightly together that the entire inflorescence may appear to be a single flower.  The stalkless (or nearly so) individual flowers within a capitulum all share a single receptacle, or a platform formed by the expanded upper portion of the flower stalk.  Another name for a capitulum is a head.  Information on the two types of flowers that can be found in a capitulum can be reviewed in the discussion of composite flowers in this column in the September 2012 issue of The Plant Press.  Pale purple coneflower (Echinacea pallida) is an example of a composite with a capitulum as its inflorescence. 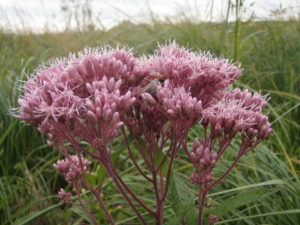 When the flower stalks from an inflorescence axis are of differing lengths, with the lowest attached branches having the longest stalks and the uppermost branches having the shortest stalks, resulting in all of the flowers being at approximately the same level, the inflorescence is called a corymb.  The outer individual flowers within a corymb typically open first, with the inner flowers opening last.  Corymbs can be simple, when each branch gives rise to a single flower, or compound, when each branch is branched one or more times and ultimately gives rise to more than one flower.  Many composites, such as spotted Joe Pye weed (Eutrochium maculatum), have heads in simple or compound corymbs. 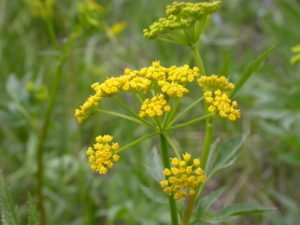 In an umbel, all of the flowers in the inflorescence are on stalks (called rays) that arise from the same point at the base of the inflorescence.  The resulting inflorescence is either flat-topped, dome-shaped, or round.  The flowers on the outside of an umbel open first, with the youngest flowers present in the middle.  Similar to corymbs, umbels can be simple, with each ray giving rise to a single flower, or compound, where each ray gives rise to an umblet, or a secondary umbel of several flowers.  Golden alexanders (Zizia aurea) is an example of a plant with a compound umbel for an inflorescence.