One of the largest and economically most important plant families in the world is the Legume Family (Fabaceae).  Members of this family are found on every continent except Antarctica, so almost no matter where you go you have the opportunity to see (and probably eat) plants from this family.  The Fabaceae is sometimes split into three separate families, or the three groups are treated as subfamilies of the larger family.  The three groups are known as the Mimosoideae, the Caesalpinioideae, and the Papilionoideae (or Faboideae).  All of these have bisexual flowers with five sepals and five petals, but there are differences in floral morphology between the groups.  Here, we will look in detail at the flowers of the largest of the three subfamilies, the Papilionoideae. 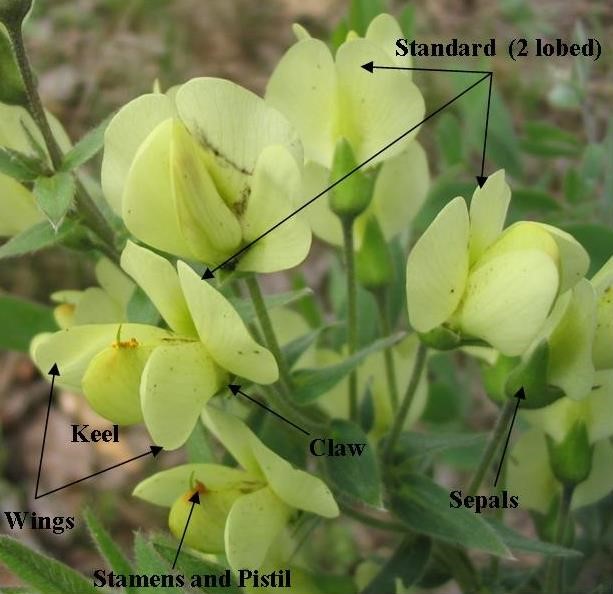 The literal translation of Papilionoideae is “butterfly subfamily.”  The reason for using this name to describe this group of plants becomes more obvious when you look closely at the flowers of plants in this subfamily, as from the correct angle they do look something like butterflies.  The flowers are zygomorphic (remember what that means from the October 2012 issue of The Plant Press?).  The five sepals are fused together, and the five petals are unequal in size.  The uppermost petal is the largest of the five and is referred to as the standard, or the banner.  This petal can often look like it consists of two fused petals because of its size and the fact that it is often lobed.  The petals adjacent to the standard on either side of it are called the wings.  The wings are identical to each other, and have a claw, which is the narrowed base of the petal.  The lowermost two petals are fused at their tips, forming the boat-shaped structure called the keel.  All of these often colorful floral parts serve the purpose of attracting pollinators; in fact, the wings serve as a landing platform for a potential pollinator.  The sexual parts of the flower are contained within the keel.  The ten stamens (male reproductive parts) are arranged in various ways but often have fused filaments (the stalks of the stamens).  The pistil consists of an elongated ovary topped by a curved style. 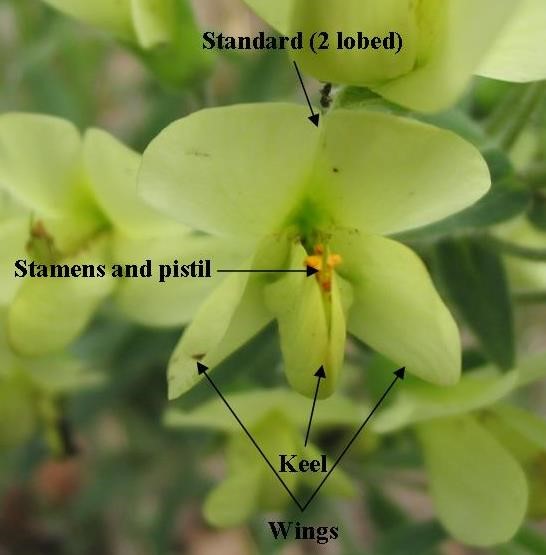 Although you may be thinking that terms such as standard, wings, and keel are made up by botanists just to make the language more confusing, that isn’t the case at all.  It is very important to understand the meanings of these terms when running a plant through an identification key… and as we all know, the best way to correctly determine the identity of an unknown plant is to use a dichotomous key of the flora to figure it out!