YOUR DAILY DOSE OF BOTANY – JANUARY 2014 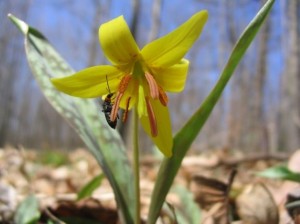 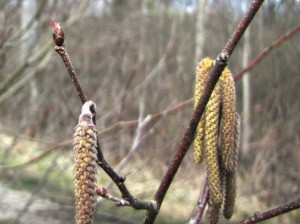 American Hazelnut (Corylus americana) has both male flowers (yellowish catkins) and female flowers (with reddish stigmas, in top left of photograph) on the same plant 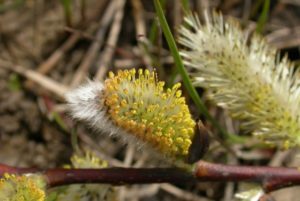 If you’ve spent time using keys to identify plants, it is very likely that you’ve run into road blocks in the form of the words monoecious and dioecious.  What do these terms mean?
Most plants have flowers that contain both male parts (stamens) and female parts (pistils).  Think of the flowers of a Yellow Trout Lily (Erythronium americanum), for example.  When each flower has functional male and female parts, as is the case in Yellow Trout Lily, the flower is said to be perfect.  An imperfect flower, then, is one that has either functional male parts (staminate flowers), or functional female parts (pistillate or carpellate flowers), but not both.  When a plant has imperfect flowers, they can be arranged in one of two ways.  If all of the flowers on a plant are either staminate or pistillate, the plant is said to be dioecious, and the plant is then considered either a reproductively male individual or a reproductively female individual.  Willows (Salix spp.) are dioecious, because you will only find staminate or pistillate flowers on an individual plant.  On the other hand, if a plant has imperfect flowers, but 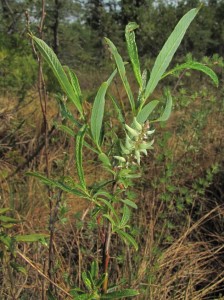