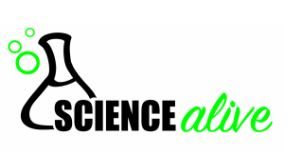 Orbis recently participated in Science Alive, a great event filled with all sorts of interesting, interactive and fun activities, each designed to get people excited about science.

The day-long gathering occurs each year at the St. Joseph County Public Library in downtown South Bend, Indiana, with activities ranging from elaborate stage presentations, to smaller, hands-on displays and experiences. Most of these are geared toward school-aged kids, but some are also aimed at enthusiasts in areas like robotics, bee-keeping, geology, and other similar fields.

Science Alive usually draws 3,000-4,000 attendees – not too bad for a library. But this year was especially popular, being the 25th anniversary. I haven’t seen any official numbers, but if the crowd in our section was any indication, we easily exceeded that number.

The Indiana University – South Bend Anthropology Club, led by Dr. Josh Wells, graciously invited me to share their table space. Their club set up a display consisting of the the skulls of several of our extinct prehistoric ancestors, along with a few modern apes, and modern humans (very convincing replica skulls, that is).  Science Alive, is of course an all-ages event, and I can’t tell you how many times kids’ eyes lit up each time they caught sight of one of these skulls. They couldn’t wait to run over and pick one up.

The Orbis side of the table included some of the tools we use while out in the field, like our iPad, fieldbook, and compass. But most visitors were interested in the artifacts. Whether they’re holding a 3,000 year-old stone tool, or a piece of a century old plate that would look at home on a dinner table today, people really seemed to enjoy the chance to interact with things they typically only see on display, on television, or online. 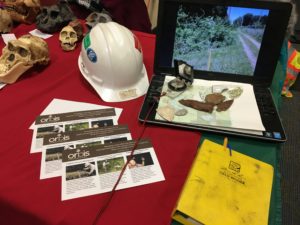 The rest of the library was jam packed with exhibits and demonstrations on astronomy, agriculture (want to hold a chicken?), biology (want to touch a snake?), ecology, geology, medicine, meteorology, physics, robotics, and technology.

Science, at times, struggles to connect to daily life. Science often seems like something that happens in a lab somewhere, or in a movie. But the success of Science Alive and similar events comes from the ability to show how science is part of the “real world”.

On just one Saturday in a Midwestern town, someone could control a robot, watch a 3-D printer in action, touch an animal they might otherwise fear, see a rocket, and hold something someone else made thousands of years ago.

Science helps us understand our world, and make better lives for the people who live in it. Many of the people there can remember a key moment from their childhood that sparked an interest in something they still love today. I wonder who might have caught their spark that day. I can’t wait to see what they do.